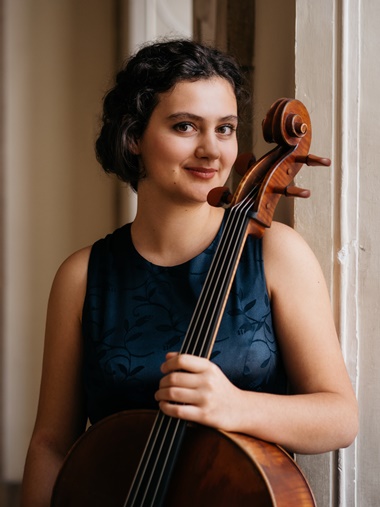 Born in 1999 in Paris, France, Madeleine Douçot started playing the cello at the age of six with Prof. Raymond Maillard. She then studied from 2008 to 2015 with Marie-Thérèse Grisenti, and in 2013 she obtained her Diploma of Musical Studies.

She started performing from a very young age, giving many concerts and recitals with pianist Marc Vitantonio in famous concert halls in Paris, Saratov and Moscow, and is now regularly invited to play in Salzburg at the Marble hall of Mirabell Palace and at the Arenberg Palace, both as a soloist and as a member of the « Tempora Trio » together with clarinettist Marius Birtea and pianist Emese Badi.

She also took part to several orchestra projects, touring regularly with Salzburg Chamber Solists Orchestra, as well as with LaFil (Milan Philharmonic) Orchestra, and she was recently invited to become principal cellist of the Attergauer Jugendsinfonie Orchestra founded in memory of Nikolaus Harnoncourt.

Since 2016 she has the privilege to study with Prof. Clemens Hagen in Mozarteum University, Salzburg.